The long journey home to borneo

This is the story of two of my dear friends, Bento and Is. They are orangutans and yes they indeed are my friends. What they went through is a sad story but unfortunately theirs is far from unique. So many of their fellow orangutans have had it even much worse. So what makes their journey so special? It is what they and their upcoming experiences will hopefully represent. They are the first two adult male orangutans of what we hope might be about 150 male, cheekpadder orangutans presently in less than optimal conditions in captivity, that have virtually no chance on a better life without bars anymore.

So where are those orangutans and why are they there without much hope at present? Let me try to explain myself and give you a storey of our plans that we hope will give new prospects for these gentle giants.

Orangutan babies are very cute and are in desperate need of protection so they quickly attach to human carers and are easily handled because of that. Adult females can be a bit unpredictable but are not as strong as adult males, especially the ones with cheek pads that are almost double the weight of half the number of other male orangutans that never reach this hormonally induced size with cheekpads and the big throat pouch.

There are many of these big giants that people tried to release. Let’s keep it at that the results have been less than satisfactory… Because of the low success in releases, the dangers involved because of their immense strength and the special facilities needed for them, many of them are now waiting in extra strong and normally small cages in rescue centers, away from asking eyes. There are also many of such males in small facilities in the zoo world. The orangutan groups on display in zoos almost never have two cheekpadders but do have several females and juveniles, so this has resulted in the “surplus” cheekpadders.

I have personally spent countless hours up close with more than one hundred of these giants and I for one know that they are suffering. They are incredibly aware of their predicament. And they literally beg me to help them. And so far all I could do was sit with them, look them in their eyes, the window to their soul. Sometimes we share some food, often I massage their massive hands or scratch the top of their heads and the back of their rubbery cheekpads. But unavoidably I always have to leave them behind again and they know it. But now I want to try something that undoubtedly will get some people upset but that I feel I owe them. A chance to live in the trees again. How? On large, secure and forested islands together with other giant males.

Now orangutans are very peaceful beings but the dominant cheekpadders are the ones that are known to sometimes enter in vicious fights about access to females. Sometimes this even has resulted in death of one of the competitors. Mostly the loser withdraws and literally shrinks again, including the cheekpads that start drooping woefully. So it will be risky to try to bring those big males together. These orangutans not just fight about female orangutans but can also be attracted to human females. The stories from the Dayaks are not fairy tales… So our approach will be to avoid any reason for competition.

This means lots of space with lots of barriers limiting visibility when needed, it’s called a sizable forest. Then they should always have enough good food on different feeding places to avoid fights about that. Finally we avoid them seeing and interacting with female humans. We only place them on these islands after careful socialization, guided by very capable experts, but that process I will explain another time. Suffice to say that with Odom Kisar and Leo Hulsker, that share amongst them more than 70 years of working with orangutans and especially also with the dominant cheekpadders, they are in the best care possible.

Back to my friends Bento and Is. Is (short for Iskandar, which is the name of the police that helped rescue him) was a four to five month baby orangutan smuggled from Kalimantan to North Sulawesi in a small box by airplane. Luckily the Tasikoki Wildlife Rescue team found out and coordinated with the local law enforcement agency and eventually at midnight on April 30, 2004, intercepted the smuggling effort. The smugglers were already on the boat and we found not just Is but also two sun bear cubs and a baby gibbon, all smuggled from Kalimantan on their way to the Philippines from the Bitung harbour. This coming month we expect to receive more than one hundred more smuggled animals to be returned from the Philippines to Tasikoki. Things have not improved and illegal wildlife trade from Indonesian alone is a multi-billion dollar business that continues to wreak havoc to our Indonesian nature. Here is a picture of Is when he was at Tasikoki and we still had hope that we would be able to send him back to an orangutan reintroduction centerin Kalimantan.

Bento was not destined to be smuggled abroad. He was a three to four year old pet brought over from Kalimantan by a medical doctor that had moved to Manado. It was exactly a year after we rescued Is that during the visit of a local school group one of the students mentioned that his family also had such a pet! The next day we paid a visit to the house and indeed discovered a very humanized Bento. The doctor voluntarily handed over Bento saving himself a courtcase. Bento’s fate would have been very uncertain when the doctor would still have had him a few years later growing into the cheekpadder he is now… Several times I had to find out that such big, no longer cute orangutans are simply discarded by the “loving” owners. Once I was a day late when we located the cage where we were told was a big orangutan. There was a bad smell… The poor male had been killed the day before and was buried just behind the cage where he had been locked up behind a big villa in the mountains near Bogor. Even more outrageous, a new “cute” baby orangutan had taken its place in the very same cage! Sometimes I can hate people so thoroughly that had I met the owner at that day I would not be able to guarantee that I would be behind bars now…

Here is a picture of Bento, shortly after arriving at Masarang’s Tasikoki Wildlife Rescue and Education Center.

Bento and Is where put together in a holding cage but were allowed to play outside in the trees where I sometimes would join them for a little outing like in the picture here to the right, already some 13 years ago. When growing up the two boys become much stronger while no center was prepared to take them in in view of the great costs of repatriation and the many other orangutans in need of help that they were dealing with. Bigger cages were built and every time the boys managed to break them down and find ways to escape, honouring the orangutan’s reputation as the most cunning escape artists in the world’s zoos.

Once the boys grew older Bento first developed his impressive cheek pads and Is was clearly the lower ranking individual. But Is grew up and started challenging the leadership position of Bento. Sometimes just wrestling games but getting more serious with the years. No amount of enrichment and care by Simon Purser, the at that time manager of Tasikoki, could change it. We even brought in touch screens and tried to connect them with other orangutans in Kalimantan and zoos in other countries, but eventually during the last year at Tasikoki, when Is had developed his own cheekpads we had to separate them.

The characters of Bento and Is are very different and I could write a book about all their adventures but I want to get back to their move back to Borneo. For many years I had been pondering ideas on how to give Bento and Is a chance on life in the trees again and with them so many other giants like Romeo, Bujang, Papa and so many other dear friends. When I met Hashim Djojohadikusumo and was asked to develop a huge reforestation project for him in East Kalimantan that day arrived. He is an animal lover and through his environmentalfoundation allowed me to build a special socialization facility for these giants. Leo Hulsker a long time friend of mine and the orangutans came up with a design that is now part of the Arsari Orangutan Sanctuary.

So finally in October with a brand new orangutan clinic in Kalimantan, a state of the art orangutan socialization facility and access to several forested islands of hundreds of hectares large, the day arrived that Billy Lolowang and Simon Purser loaded the specially build stainless steel transport cages on the truck that was to undertake the several day journey to the harbour of Palu in Central Sulawesi from where they crossed by ferry to Balikpapan to drive the last three hours from there to the Arsari Orangutan Sanctuary. I will let the following pictures give an impression of the move to their new home.

The cages with Bento left and Is on the right are loaded. Is destroys a wheel.

Food was the only way to keep both boys a bit quiet during the four days of the transport. Durian!

The huge truck bringing the boys 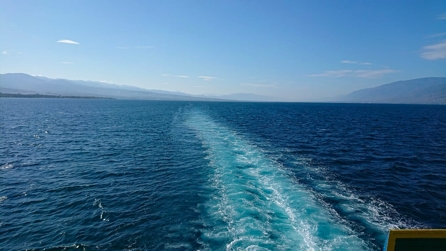 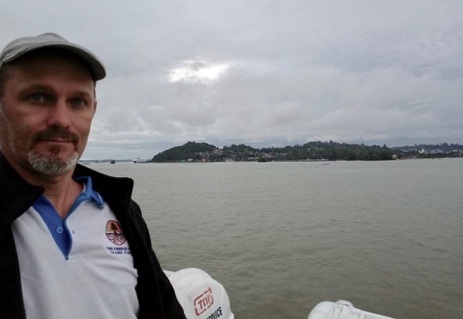 Leaving Sulawesi for Kalimantan. All pictures by Simon Purser in the picture on the right. 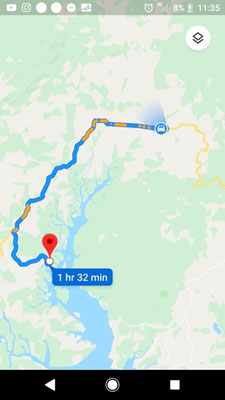 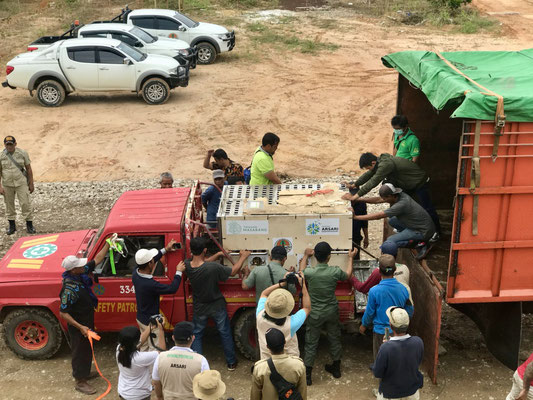 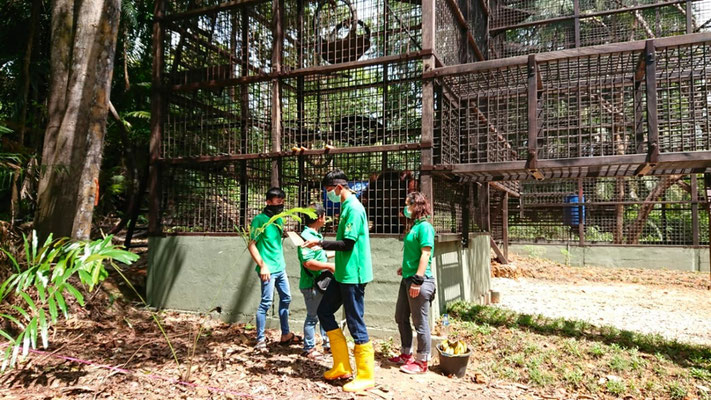 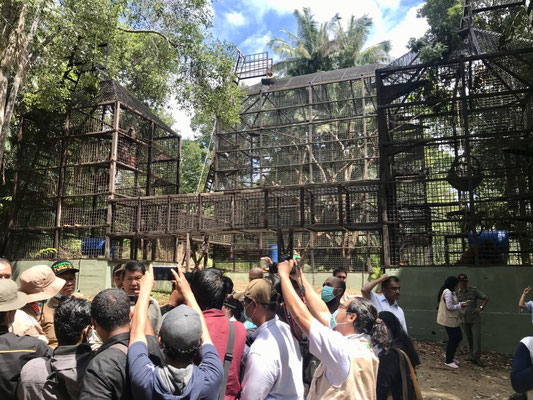 The transport had been exhausting for the staff and stressfull for Bento and Is. But it was remarkable how quickly both people and orangutans recovered. Still we wished the Indonesian airline Garuda would still have flown the route Manado – Balikpapan so we could have avoided this cumbersome trip. Nevertheless the arrival of Bento and Is gives real hope for a long term solution for those big “unreleasable” orangutans. 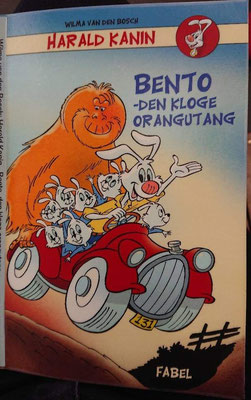 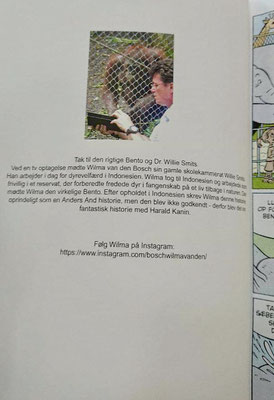 I just learned about this comic book about Bento that was written and drawn by an old school friend of my secondary school in The Netherlands, Wilma van den Bosch. I guess I have to tell her that there might be new adventures about Bento to write about!

After the busy days the team (from right to left: Odom, Leo Hulsker, Rajuli, Echa and myself) will have time to work with Bento and Is. Already we have seen the first signs of peace making between them, sharing food with each other through the bars! Fingers crossed!