Today, Digo, Putri Tanjung and Liesje embark on a long journey to the Kalimantan Forest. Three rehabilitated orangutans of Sintang Orangutan Rescue (SOC) will be released in Betung Kerihun National Park, West Kalimantan. However, actually their journey began when they arrived at SOC.  Digo was rescued by the West Kalimantan BKSDA in May 2013 in Pontianak from its owner. At that time, she only 5 months old. After undergoing a period of health rehabilitation in SOC for 1.5 years, the orphan baby then underwent a period of rehabilitation of behavior at the Tembak Forest School since December 2015. During the school, she learned various skills needed by orangutans to survive in their natural habitat.

Putri Tanjung was much older than Digo when rescued by Sintang Conservation Area BKSDA and SOC on January 14, 2014. She was 9 years old at that time. Coming from Melawi Regency, West Kalimantan, she spent most of her life in a 1.5 x 1.5 x 1.5 meters iron cage. The world is very narrow for her. Her movements are very limited. Almost impossible for her to learn how to climb a tree. Though orangutans are explorers and tree dwellers. After many years of confined life, Putri Tanjung was introduced to a bigger world she never knew. After undergoing a period of health rehabilitation in Sintang, Putri Tanjung began attending a forest school at the Tembak Forest School on September 12, 2015. Orangutans that have been cared for by humans for a long time will lose their natural instincts and are unlikely to survive if released into their natural habitat. They must learn to be wild again.

While undergoing a period of behavioral rehabilitation at Tembak, the keeper found that Tanjung accidentally mated Mamat, a male orangutan who lives in the same forest school. This was quite surprising because when he arrived at Sintang, Mamat was almost paralyzed. But thanks to the patient and compassionate care, Mamat managed to recover and mate.

On April 8, 2018, Putri Tanjung gave birth to a baby orangutan female. The baby was named Liesje as a tribute to Liesbeth van der Burgt, a Dutch volunteer who helped raise funds for the construction of the Jerora Forest School. Liesbeth is often called Liez by her friends. Additional "je" - commonly used as an additional favorite calling for children in Netherlands.

Putri Tanjung learned to be a wild orangutan while caring for her baby. Tanjung soon proved to be a good mother for her baby. She carried the baby wherever she went. She bathed Liesje. If the baby cries, Tanjung gently carries it immediately on her back. When it rains, she covers her baby’s head with a broad leaf. Liesje grew up healthy in the Tembak Forest School. Tanjung introduced her child to a variety of orangutan natural diet, how to climb trees and construct a nest. In their natural habitat, baby orangutan lives with its mother for 6 to 8 years before finally living independently. Mamat, Liesje's father, does not seem to be able to completely go back wild. However, her daughter had an opportunity to return to natural habitat.

Digo, Putri Tanjung and Liestje begin their new journey from the Tembak Forest School. They will travel 400 kilometers from Sintang to Puttusibau, West Kalimantan. On 31 October 2019, the three orangutans will be released to Betung Kerihun National Park. This release was special because it was also attended by a number of orangutan supporters including 8 people from Orangutan Rescue and 8 people from Weesaapjes. This release is the 5th release by SOC so far. A few months earlier, two male orangutans, Oscar and Gagas, had been released at the same location. Both can adapt to their new environment well. Immediately after being released, the two orangutans moved away from the release site.

Hope rose when the three orangutans left their rehabilitation center. But now they must face the real challenge, living independently in the wild. But at least, they are free and will be at home soon.

take them back where they belong -a blog from willie smits

That was the slogan I once printed on T-shirts.

This was done for some of the more than 500 orangutans over many orangutan releases I have been involved with over the last 27 years. And this week three more orangutans named Digo, Tanjung and Liesje were able to join those others that we already returned to the jungle.

This last release took place on the 31st October, 2019, in the Betung Kerihun National Park. After a six-hour journey over a curvy and often bumpy road and another four hours travelling by boat over the rapids trying to avoid shallow rocks, we eventually reached the Sintang Orangutan Centre camp. This is at the border of the national park.

The orangutans had arrived earlier that day and I was most pleased to find them completely relaxed in the large temporary holding facility eating wild food and making nests with the many branches the staff had provided them as can be seen in the picture here.

Tanjung and her baby Liesje, were completely at ease, but when Tanjung saw and recognized me she came over and pointed to the lock to ask me to open the door. I pulled as hard as I could but of course the chains were much stronger than the force she and I could apply and Tanjung was content I had given it a real try and went back to relax in her nest. Digo in the holding area next to Tanjung and Liesje, had been watching carefully too and with little shrieks had been encouraging me to pull harder on the lock. Seeing we failed Digo decided the next best thing she could do was to ask me for a good neck and shoulder massage as I had done for her more than a year before.

After that, with darkness arriving at a great speed here at the equator, the sound of cicadas, frogs and lizards announced the approaching night and I returned to the wooden camp surrounded with tents for the many visiting supporters that were here for the special occasion of the orangutan release. Many of the guests enjoyed a bath in the cool fast streaming crystal clear water of the river. This water comes from the mountains still much further upriver and has been filtered by thick virgin forests that have been here for hundreds of millions of years and have not ever been cut or burned by people. Our camp site is beyond the very last Dayak village where we are in a very special and protected forest, which is part of the national park, deep in heart of Borneo. The head of the national park, Ferry Liuw, a friend, also joined the release and his staff was assisting SOC every step of the process.

We had eight visitors from Weesaapjes, a foundation for orphaned primates that was set up by my good friend Liesbeth van der Burgt, who passed away much too young. Little Liesje, the daughter of Tanjung and Mamat, a special male orangutan who has his own special story, was named after Liesbeth and these eight close friends from The Netherlands were here to jointly celebrate this special moment with us and to commemorate Liesbeth. Weesaapjes was run by Ingrid van der Locht, at the request of Liesbeth, before her death and she had the honour of opening the release cage of Tanjung and Liesje. We also visited the Jerora orangutan forest school where we built the Liez centre with the donation from Weesaapjes, and where Marco van der Aa, Liesbeth’s close friend, had placed the commemorative plaque a year before. Another touching moment.

We were also joined by the volunteers from Orangutan Rescue in the Netherlands, (orangutanrescue.nl) our main supporters of SOC, and by other Dutch supporters. Henk Kaskens, the Chairman of Orangutan Rescue nl, was accompanied by his daughter Femke, Hugo Wortel, the secretary, Corne, the treasurer and his wife Margriet Seyners, who also supports the adoption program and other activities of Orangutan Rescue. Willy van Mensvoort my friend since over 55 years and his son Simon also joined. Willy has continued to support the projects I founded for many years and is a wonderful networker. Willy, his wife Yvonne and their son, Simon, also have great passion for sustainability and protecting the natural environment.

I used to bring such pieces of wood, especially those with a bunch of small glowing mushrooms, to have light at night. This occurs as long as the wood stays moist. Then it was time to find a place to sleep under one of the many prepared mosquito nets and let the sounds of the jungle (and some loud snorers!) take over the night. 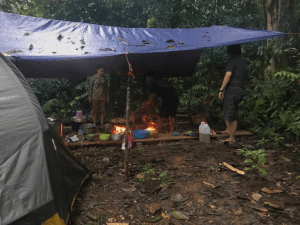 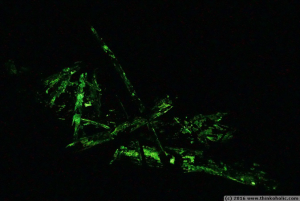 The next morning, on October 31st, 2019, after breakfast the official ceremony of our SOC centre (Dudung) took place, with the ‘handing back’ of the orangutans to the forestry police, who then handed them over to the head of the national park to become their responsibility. Then it was time for action and the boats left like clockwork as planned by the staff the previous evening. Further upriver we went for the release site. Some of us went up a small creek and made a little excursion in the rain forest where I told the visitors how all these components in the forest are intricately interconnected. Then we all headed to the release site to await the boat with the orangutans to arrive.

Everyone was able to experience why these tropical rainforests have rain in their name  and it can be really cold during showers and on a moving boat with cooling wind. 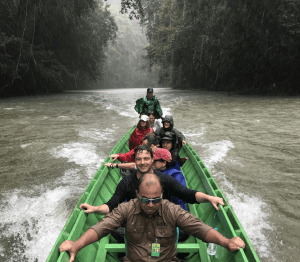 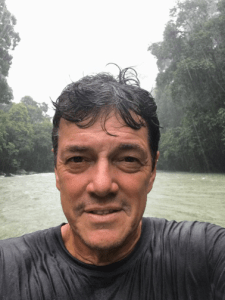 Then there was the moment we were all waiting for. Jointly pulling the ropes the first cage was opened by the head of the national, pak Ferry and the head of the regional forestry police, assisted by Dudung and Wilma a new supporter of the Sintang Orangutan Center the cage opened and Digo immediately rushed up a big liana for some 30 meters after which she stopped to explore her options. Shortly after it was the turn for Tanjung and Liesje. Ingrid of Weesaapjes pulled the cage open and Tanjung, and baby Liesje sitting on her head, went up another big tree also to then stop and quietly consider her plans. There were a lot of tears of happiness with the many witnesses.

We know that we cannot solve all problems by just releasing these beautiful beings in this remote place but without doubt their new lives give us inspiration and hope. And then we were told some unexpected happy news. Juvi, the very first orangutan to be released by the Sintang Orangutan Centre, had just been seen again after one and a half year. Best of all… she was not alone. She was carrying a healthy beautiful orangutan baby clinging to her long hair! She had met a wild male and gave birth to this new life in freedom! What a precious gift! Here is a picture of the new successful mother. She looks very healthy and confident and the little baby can be seen clinging to her belly.

Thank you to all our wonderful supporters, Orangutan Rescue, Weesaapjes, Masarang and individuals that give us the chance to do this for our beautiful red haired cousins and give the world and them a little hope!

A last look back at the forest and the orangutans going back downstream leaving the virgin jungle to them.